Can you really prepare for triggered lightning?

Triggered lightning, or aircraft induced lightning, does not happen often. But it always happens unexpectedly. Is there a way to see it coming?

Now that autumn is in full swing, the occasional presence of wintry showers that can produce triggered lightning (or 'trigger lightning') over the North Sea will gradually increase. The triggered lightning phenomenon is well-known within the aviation world; and despite it being a pretty rare occurrence in practice, it still surprises many flight crews and can seriously delay offshore operations.

At Infoplaza we are always on the lookout for triggered lightning when the synoptics require it, usually in combination with other events in which common lightning can occur. This best practice procedure is followed in order to reduce downtime and costs of offshore operations as much as possible, and to ensure that the safety of staff is of the highest priority. But can you foresee triggered lightning striking aircrafts like helicopters?

To provide some situational awareness: let us first have a closer look at lightning and why it occurs.

Lightning in summer and winter

Thunderstorms are most common during summer when warm moist air is being lifted along fronts or troughs, forming deep convective clouds reaching all the way to the tropopause. Within these massive clouds (Cumulonimbi) strong up and downdrafts force supercooled droplets and different types of ice particles to collide, resulting in effective charge separation. Basically, in this instance the cloud is being turned into a rechargeable battery with different regions of positive and negative charge. When these polarities become strong enough and the electrical breakdown voltage of air is exceeded, lightning will occur to balance out the differences for a short period of time before recharging takes place, possibly enabling a next strike. 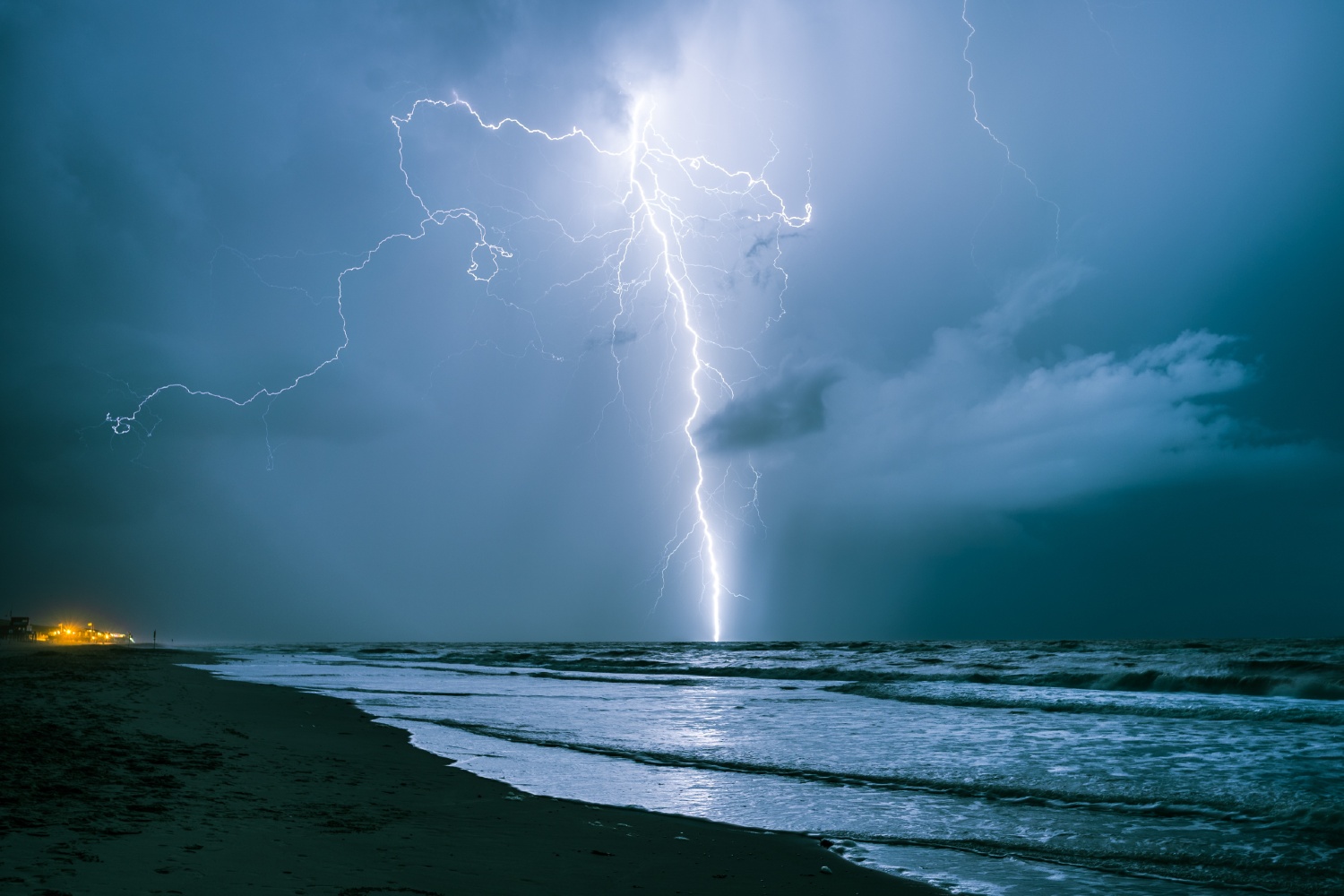 During winter, convective clouds do not reach as deep into the atmosphere and both up and downdrafts are usually weaker. Therefore, charge separation isn’t as efficient. Regions of different polarities within the cloud are obviously weaker while coexisting rather close to the earth’s surface. As a result, wintry thunderstorms produce significantly less lightning compared to their summer counterparts, but the number of strikes between the cloud and the earth is relatively larger. These characteristics make wintry showers treacherous as lightning sometimes seems to occur without any warning.

When winter weather convection is rather shallow and natural lightning seems unlikely due to limited instability and weak associated updrafts, helicopters might sometimes act as a trigger to set off a lightning strike. Usually, the helicopter carries a negative charge, possibly facilitating a strike which normally wouldn’t have occurred when flying into or approaching a diversely charged Cumulonimbus cloud. This is called ‘triggered or trigger lightning’ (or aircraft induced lightning) and can, despite protective measures on the aircraft itself, pose a significant hazard for the helicopter involved. In our weather room some meteorologists sometimes refer to these hybrid lightning strikes as ‘forbidden lightning strikes’, as natural lightning is mostly absent in such cases and little or no warning occurs prior to the strike. Normally, the rotor blades are the main focal point of the negative charge due to their high angular velocity. Therefore, they tend to be the most common points of entry/exit for a triggered lightning strike. 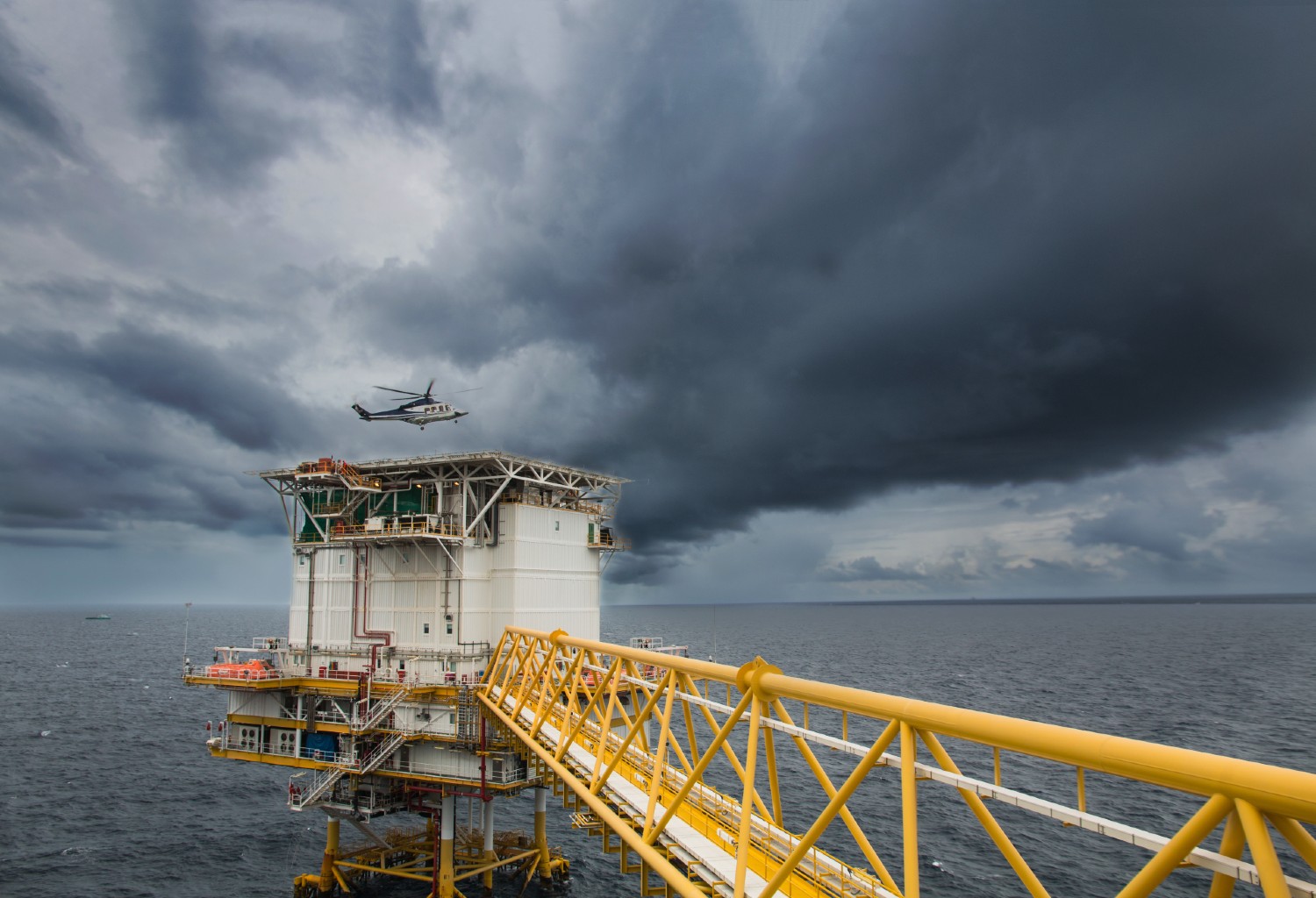 So, what causes triggered lightning?

Despite triggered lightning not being a well-documented phenomenon, a fair amount of research has been done lately on how and why these strikes occur. For the North Sea area, the vast majority (~70%) of triggered lightning sensitive settings feature northwesterly airflows in which unstable polar air is advected over relatively warm sea water in the period October to April.

The resulting convection usually remains below 15.000ft (FL150), and top temperatures of the clouds typically linger between -10°C and -15°C. Note that other, less frequent synoptic patterns can also inhibit shallow wintry convection which can also produce trigger lightning.

Most triggered lightning strikes tend to be observed when flying around the altitude of the freezing level  (FZL), which typically lingers between 1000-3000ft, and with outside temperatures at cruising altitude between -3°C and +1°C. Convective cells showing an increasing radar reflectivity of at least 31 dBZ are prone to trigger strikes as they might be close to producing a natural discharge.

It is important to mention that the helicopter doesn’t necessarily has to enter a convective cloud to trigger a strike. It can also happen below the cloud base or even under the anvil. In the latter case no wintry precipitation will be observed by the pilot, making a strike appear as if ‘out of the blue’. In the past there even have been reported discharges when flying through Stratocumulus without, according to the flight crews, having a visual on convective clouds. Most of these rare cases could be explained by non-convective clouds obstructing visibility on possible embedded Cumulonimbi nearby.

So to answer the question in the title: can you prepare for triggered lightning? Yes and no. You can avoid certain weather conditions, but even then weather can be unpredictable. Still, we hope this article has given you some pointers for the coming winter. Are you curious about whether our services can contribute to the success of your operations by avoiding areas in which lightning in general might occur? Feel free to contact us at any time. We also share these kind of insights regularly on LinkedIn. Be sure to follow us there as well to never miss an update!