North Sea weather briefing: Heavy swells and the role of the British Isles

Atlantic low-pressure dominates the weather over most of northwestern Europe over the coming days, with several deep lows swiftly tracking East across the northern Atlantic towards Scandinavia. The wave fields whipped up by these massive systems will batter the British Isles frequently this week. Find out whether these heavy swells will be able to enter the North Sea as well in this week’s weather briefing below.


A classic pattern unfolds over the northern Atlantic and the North Sea this week, with areas of low-pressure tracking East across the Atlantic towards Scandinavia, generating a strong westerly orientated airflow on their southern flank. Higher up, the jetstream provides conductive upper air support, allowing some of these lows to deepen occasionally as they mature. Associated (frontal) troughs will sweep frequently Eastwards across the North Sea area this week, enabling a few wind and wave peaks. The most pronounced peak for the North Sea will occur ahead of a deepening low later today and possibly also on Friday. At the same time high-pressure remains largely stationary near the Azores, maintaining a ridge into Southern Europe at times. In between, a slightly undulating westerly flow regime remains predominant (see Fig. 1). 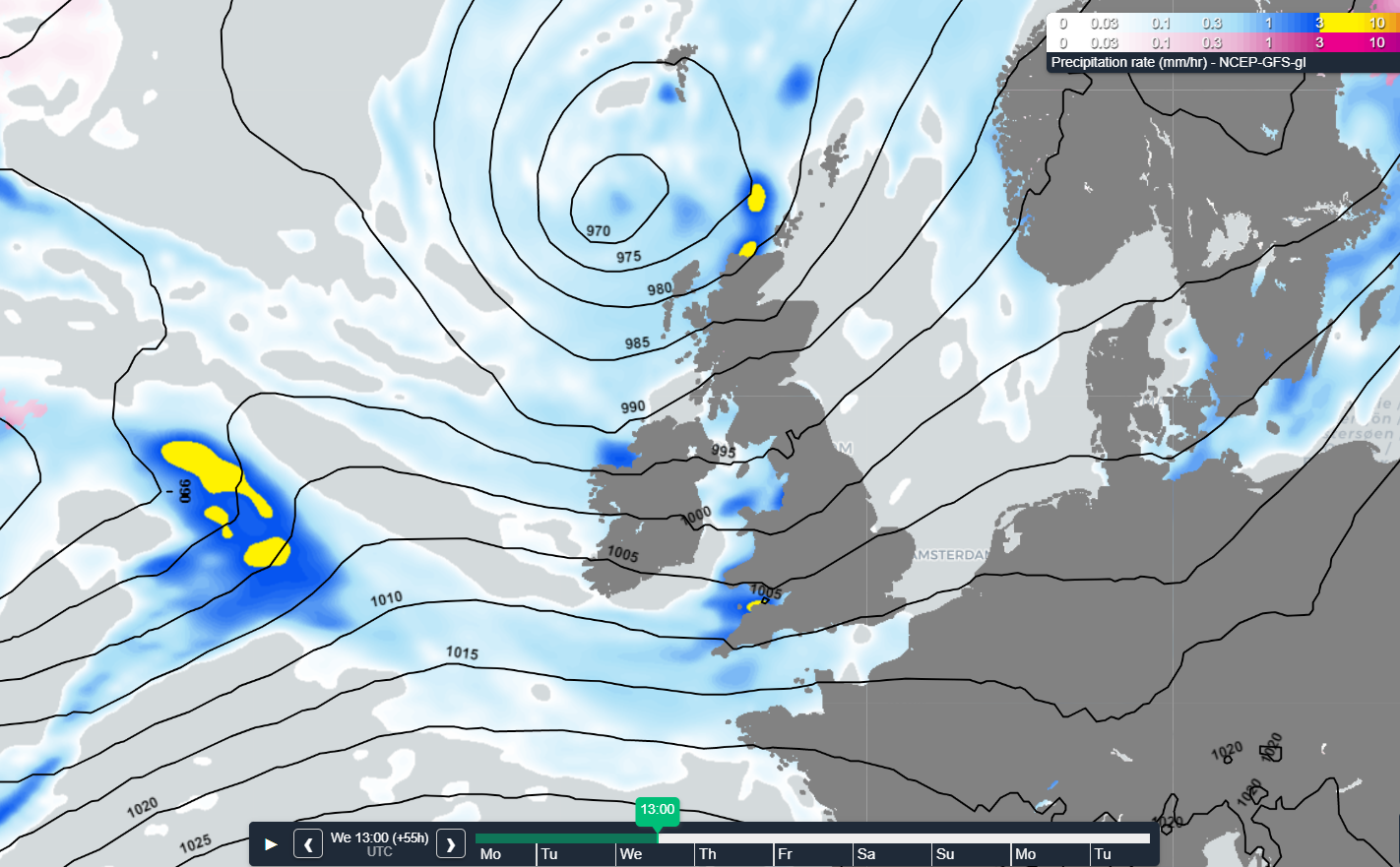 Fig.1 - Westerly airflow from the Atlantic across the North Sea towards Scandinavia.

Wind and waves in the North Sea

As discussed previously, the wind associated with the Atlantic lows generally tends to be positioned on the southern flank, allowing for severe gales to occur several times over the Northern Atlantic this week. Long fetch and deep water provide an ideal setting for impressive swell systems to build, especially during the second half of this week, contributing to Hs which easily reaches 7-10m whilst traveling Eastwards across the Atlantic, before breaking on the western coasts of the British Isles (see Fig. 2). 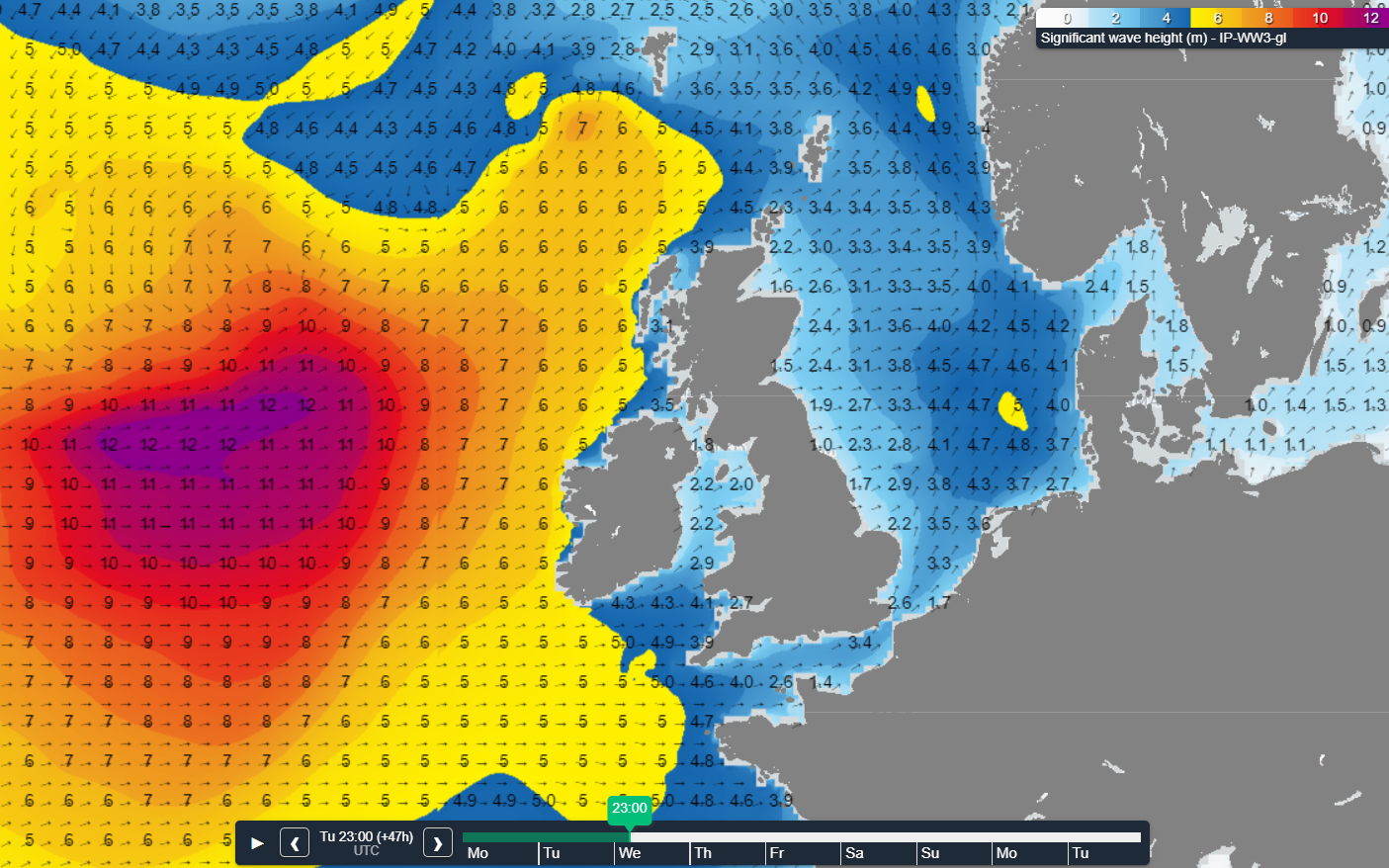 This is where the sheltering effect of the British Isles comes into play. As the main wave direction is west to southwest virtually none of the wave energy will be able enter the North Sea, except for the northern parts perhaps where diffraction might allow some of it to bend and squeeze in between the Scottish North coast and the Shetlands. The largest contribution to Hs over the North Sea will therefore mostly come from wind waves which are directly linked to the passage of areas of low pressure and associated troughs.

A first peak is expected to occur later today as winds shortly back to a southerly direction whilst increasing to gale force (8 Bft) ahead of a deepening low. Waves are therefore able to build to 3-5m, coming night possibly increasing to 5-7m over Viking as the low itself grazes the area and winds reach 9 Bft. In its wake winds veer to southwest whilst decreasing. Hs lowers accordingly.

The next peak can be expected over the Southern North Sea on Thursday as a frontal trough might generate a separate low, shortly producing (strong) gales on its southern flank, 8-9 Bft. The pace at which the system deepens as well as its track will determine the eventual conditions offshore. It certainly has potential for some hazardous weather for a short period of time. Rather short fetch limits wave height though, most likely ending up around 4m.

Later on Friday yet another low crosses the North Sea, with Hs probably between 3-5m. But once again the British Isles play a crucial role in reducing wave height even though west to southwesterly winds possibly increase to (strong) gale force by then, 8-9 Bft. The track of the responsible low is somewhat uncertain but will most likely lie over the northern North Sea (see Fig. 3).

In general, rather windy and occasionally unsettled conditions will prevail over the North Sea this week with several wind and waves peaks associated with the passage of areas of low pressure and their (frontal) troughs. Given the sheltering effect of the British Isles wave height over the North Sea seems to remain relatively limited, despite the occasional presence of (strong) gale force winds. Depending on your operational limits aforementioned wind and wave peaks will still be able to disrupt your operations though.

Every week we will post an updated weather briefing on the Infoplaza website and the
Infoplaza Marine Weather Operations LinkedIn page. There we also share weather related articles and topics on offshore weather. For now, stay safe and feel free to contact us at any time in case of questions or remarks.