A complex low-pressure area over the northern half of the North Sea splits up in multiple, separate, low-pressure cores. Those low-pressure cores will track in a southeasterly direction and bring relatively cold upper air further south. This results in windy conditions accompanied by swells and wintery showers. However, the weather will change significantly later in the week.


A high-pressure area over the Azores builds a ridge north towards Iceland and Greenland. This ridge will end up blocking the west circulation experienced during the previous weeks. However, a low-pressure area will hold over the northern half of the North Sea and is expected to split into multiple small low-pressure cores. These cores track slowly in a southeasterly direction over the North Sea. Due to the lack of upper air flow and divergence at higher altitudes, these low-pressure cores are forecasted to track relatively slowly and will not grow into large systems. The strong ridge of high-pressure located over Ireland and Iceland starts shifting to the southeast later in the week, resulting in stable weather over the North Sea.

In between the high-pressure system over the Atlantic Ocean and a low-pressure core over the North Sea is a strong northwesterly wind (7-8 bft), indicated by the yellow and orange colors in Figure 2 below. This is expected to produce significant wave heights of 6m on the Atlantic Ocean and between 4 and 5m Hs just on the southwest side of the low-pressure core over the North Sea (Figure 2).

Because the wind is coming from the northwest, there is a very long fetch. This will generate Hs in between 2.5 and 5m over large parts of the North Sea. Only in the most southern tip of the North Sea, near the English Channel, Hs is lower due to the shadowing effect of the UK.

The minor low-pressure area over the northern and central half of the North Sea on Wednesday tracks further southeast and reaches the German Bight and Denmark on Thursday. The low will start slowly filling up around this time and a small through will track over the North Sea in its wake. Showers might contain hail and (wet) snow, due to the cold upper air. The airmass originates from Greenland and tracks southeast in between the high over the Atlantic and the low over the German Bight over the North Sea. 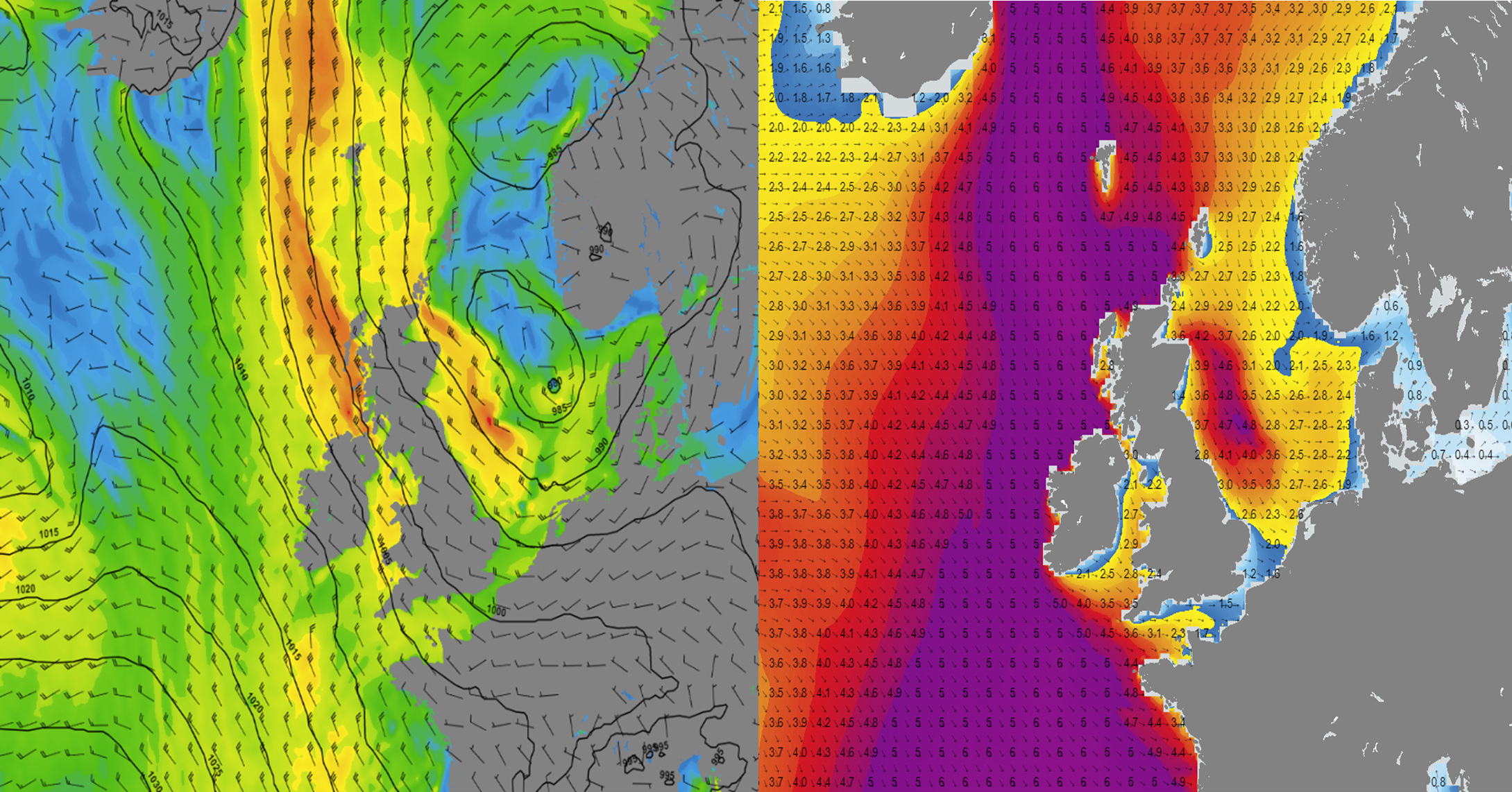 Figure 2: Wind speed and direction together with the forecasted sea level pressure for Wednesday 15 UTC (left) and associated significant wave height depicted with the mean wave direction on Wednesday at 15UTC (right).

The ridge of high pressure over the Atlantic reaches the northern half of the North Sea on Friday and tracks further south during the weekend, resulting in a stabilization of the current weather pattern. Due to the lack of pressure gradient, wind speeds decline rapidly when the high settles over the North Sea.

The weather will remain unsettled over a large part of the North Sea until Thursday - especially on Wednesday and early on Thursday as a minor low-pressure core tracks southeast over the North Sea. This results in waves up to 2.5 to 5m and winds up to 7-8 bft, gusting to 40-45kts during (wintery) showers. The current weather stabilizes on Friday and remains calm during the weekend. Swell waves are still present on Friday and Saturday despite the relatively low wind speeds.

Every week we will post an updated weather briefing on the Infoplaza website and the Infoplaza Marine Weather Operations LinkedIn page. Here we will also share extra insights you might find useful. For now: stay safe and feel free to contact us at any time in case of questions or remarks.