Be prepared for a prolonged period of very strong winds and high waves over the northern parts of the North Sea this week.

After a short break last weekend, with relatively calm weather under the influence of European high pressure, Atlantic lows are now keen to take control over the North Sea this week. Thursday especially has the potential to become quite a gnarly day for some areas of the North Sea. Find out what we expect might happen below.

Summary for this week

In the last few days, the North Sea, and in particular the southern half of the North Sea, has been benefitting from high pressure moving East across the European mainland. As that high continues eastwards, the systems influence over the North Sea will gradually decrease this week. In the meantime, deep lows will regroup over the northern Atlantic in between the UK and Iceland. Ahead, a blocking high will be whipped up over the northern parts of Scandinavia.

As the North Sea will be right in the middle of these two main pressure systems the weather will become increasingly unsettled in coming days with several frontal troughs sweeping across the area from the southwest. Along one of these troughs a secondary low is likely to develop over the Celtic Sea during Wednesday, curving North across the UK before slowly filling near Scotland later on Thursday (see fig. 1). It’s track and development will be closely monitored at Infoplaza. 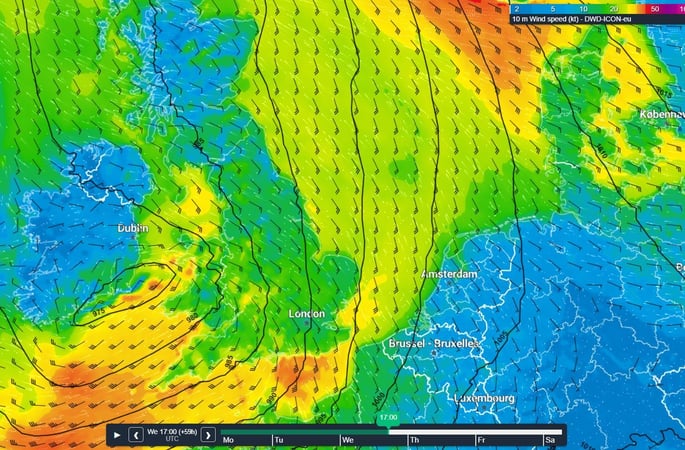 Ahead, the pressure gradient tightens over the North Sea on Thursday with possibly (strong) southeasterly gales as a result. Another area which is prone high wind speeds is the funneling area over the Northeastern North Sea, just west-southwest of the Norwegian coast. Local effects at this location may produce strong gale to storm force winds, possibly lasting several days from Wednesday onwards.

Wind and waves in the North Sea

As the prevailing winds will have tended south to southeasterly direction coming days, fetch will be shortest over the southern parts of the North Sea, restricting the buildup of high waves in that area. As a consequence we expect Hs to gradually increase to 1.5 - 3.0m on Wednesday in that region. Further north Hs will be more significant with values easily reaching 7.0 or 8.0m in the far north.

Ahead of Thursday, low winds will strengthen, gradually increasing Hs over the larger part of the North Sea; in particular over the northern regions given the continuous South to Southeasterly wind direction. Hs will likely peak at around 10m in the far north because of funneling effects on the southwestern flank of the Norwegian coast, whipped up by very strong winds possibly reaching storm force (9-10 Bft). See fig. 2 and 3. 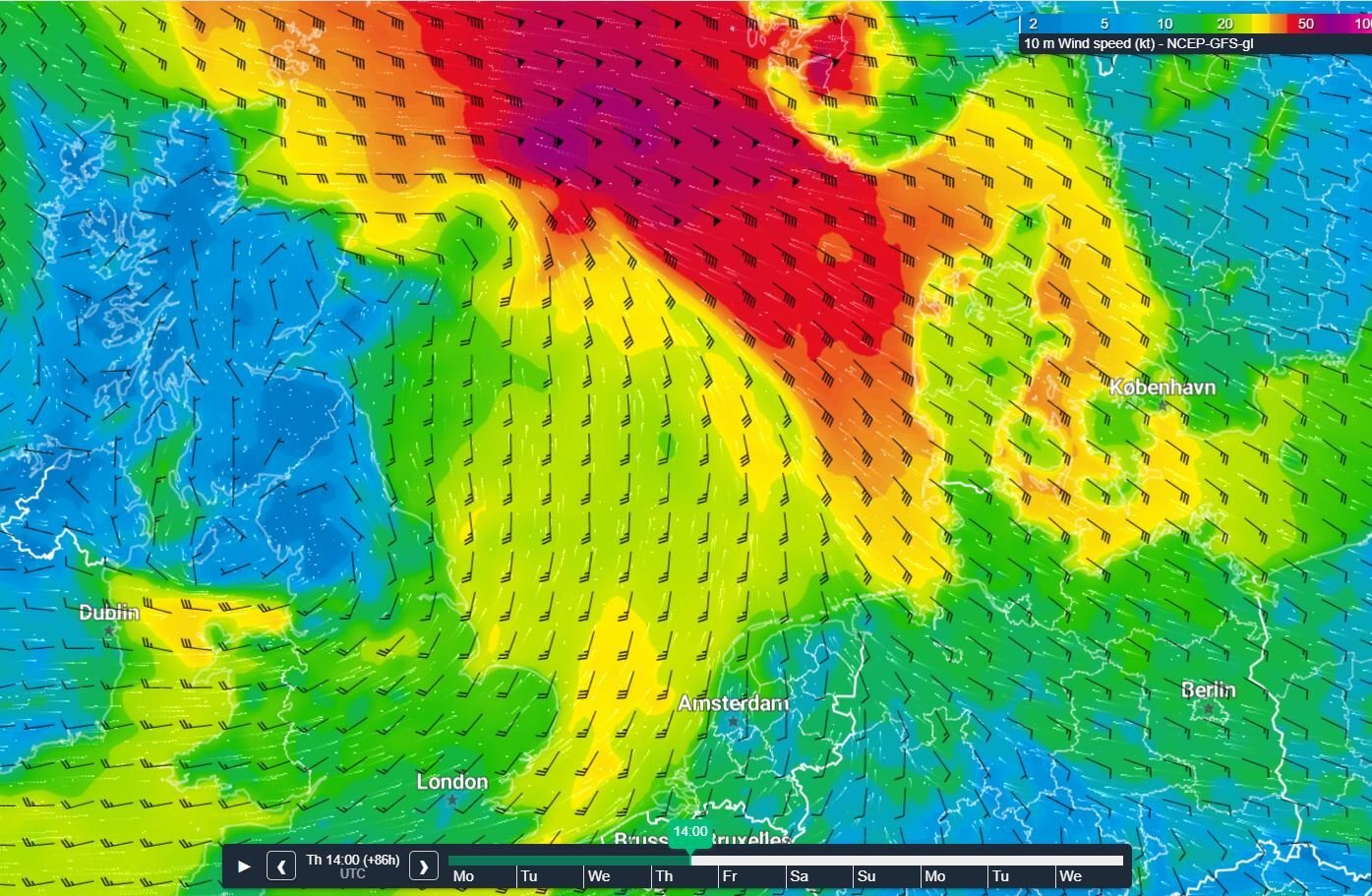 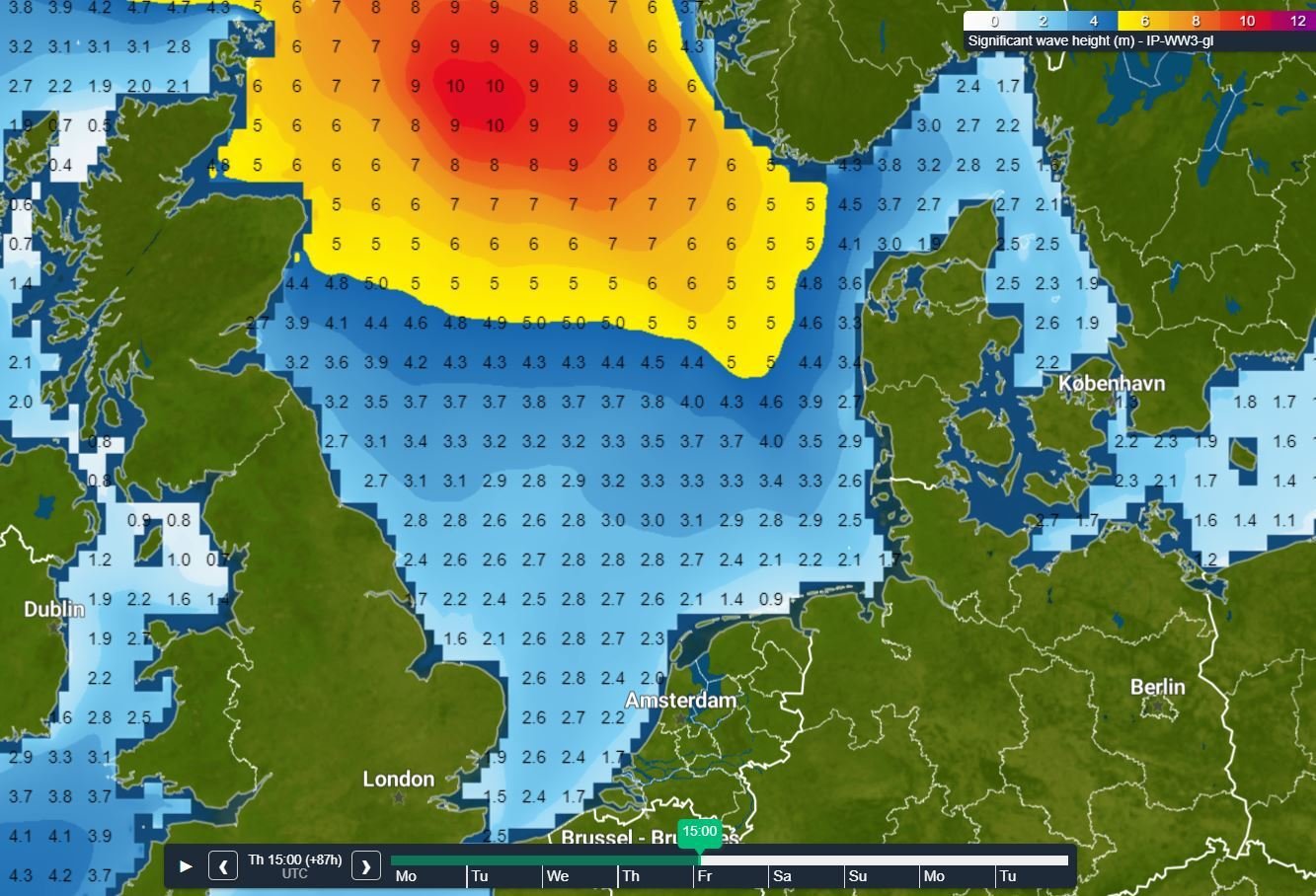 On Friday the atmosphere is expected to calm as Thursday’s low leaves the North Sea area to the North. Winds will decrease and veer to a more West to Southwesterly direction. As a result, Hs will quickly respond and lower to 1.0 - 2.0m. As the wind field leaves to the North, the turbulent waters of the northern North Sea will calm down last and will still hold waves between 5.0 and 7.0m well into Friday evening.

So, all in all, be prepared for a prolonged period of very strong winds and high waves over the northern parts of the North Sea this week. Whether you're North or South in the North Sea, stay safe, and feel free to contact us at any time in case you have of questions or remarks.