We start this week with a brief moment of stable weather conditions, but that is about to change.

To begin this week’s Weather Briefing: we hope everyone had a nice Christmas and New Year's Eve and we trust that 2023 brings safety and success for all those working offshore.

Last week, a complex low-pressure system with multiple secondary lows brought unsettled conditions to the majority of the North Sea. Will this week see the same conditions, or will calm and stable conditions prevail?

On Tuesday 3rd January, low pressure is present near Iceland, with a secondary low just west of Ireland, while pressure is relatively high over Scandinavia and near the Azores. The Azores high extends a weak mobile ridge over the North Sea, but will decline in the night to Wednesday, as it is pushed away towards the east by the low-pressure area.

Over Wednesday, the situation will become unsettled. The low-pressure area will move over Scotland and across the Northern North Sea. The exact track and development of the low is uncertain. The confidence is therefore low, which makes it difficult for a robust planning.

Figure 1: Forecast by GFS at Wednesday 4th January, 18 UTC. Here the low-pressure is present along the southwest Norwegian coastline.

On Tuesday, wind speeds under the influence of the ridge generally reach 4-5 BFT. Once the ridge leaves the area, winds will increase to 6-7 BFT. Significant wave heights (Hs) are expected to be 2.0 – 3.0m. As stated previously, the situation becomes more uncertain on Wednesday, especially for the Northern North Sea. Winds over the Central and Southern North Sea are forecasted to reach 6-7 BFT. In the Northern North Sea, wind speeds locally reach gale force (8 BFT). Values of Hs generally reach values of 3.0 – 4.0m.

On Thursday, when the weak mobile ridge extends its reach over most of the North Sea, wind speeds decrease. With a Hs expected of 1.5 – 2.0m, we can classify the weather as relatively calm and stable. The calm and stable weather however is quickly forced away by a new low-pressure area, rapidly moving E across the Northern North Sea on Friday. Wind peaks shortly at 9-10 BFT around the center of low-pressure, and Hs may increase to 7 meters. Highest waves are expected between the Shetland Islands and Norway. Waves decrease moving south from 5 meters in the Central North Sea to 2 meters in the Southern North Sea. 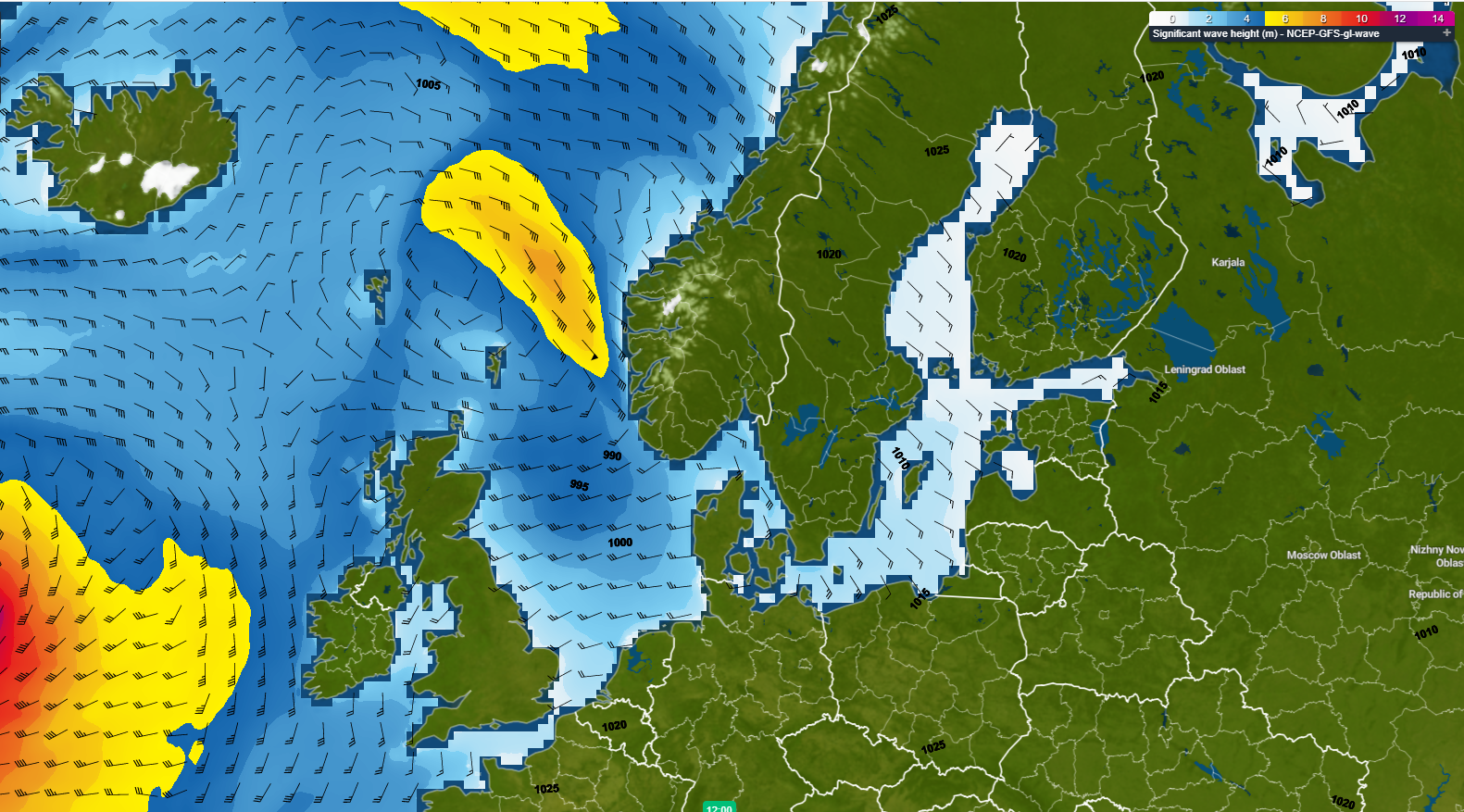 During the weekend, winds again generally reach force 4-7 BFT. In the Northern North Sea, winds can pick up shortly to (severe) gale force. As the prevailing winds tend to have a preferred south to southeasterly direction, fetch will be shortest over the southern parts of the North Sea, disabling the buildup of high waves in that region. In this area we expect Hs to gradually increase to 1.5 – 3.0m. Further north, Hs will be more significant with values easily reaching 6.0 or 7.0m in the far north.

We start this week with a brief moment of stable weather conditions, due to a weak mobile ridge. On Wednesday, the weather becomes unsettled and more uncertain. Afterwards, another mobile ridge will extend its reach over the North Sea, with decreasing wind speeds and wave heights as a result. On Friday, a small new area of low-pressure tracks east over Scotland and Northern North Sea towards the Norwegian Sea. During the weekend, a major complex low approaches the North Sea from the west. Winds and wave heights increase by then.

We'll post this weather briefing on the Infoplaza Website and also the Infoplaza Marine Weather Operations LinkedIn page. We also plan to share any relevant weather articles and topics on Marine and offshore weather there. So to never miss an update, be sure to follow us on LinkedIn. For now, stay safe and feel free to contact us at any time in case of questions or remarks.